Day 10: Monday 7th July
Today Miss Hannaford took me on a very special access all areas tour of Walt Disney World called ‘Backstage Magic’. We started at Epcot and something I learned straight away about Epcot is that the word ‘Epcot’ stands for Experimental Prototype Community of Tomorrow. Walt Disney wanted to create a new way of designing a suburb where people live. Sadly Walt Disney died before he could create his new community, but his brother Roy Disney still created the theme park part of the plans and added in a space called World showcase.

Behind the scenes at Epcot we saw how the robotic people called ‘Audio Animatronics’ that you see in many rides and attractions work from behind the scenes at an attraction called “American Adventure”. Now to preserve some of the secrets and to protect the privacy of the people who work backstage at Disney World, the people on the tour, including Miss Hannaford and I were not allowed to take photographs or video. However, Disney has published some things on youtube so I can share them here.

After Epcot, we went to the Walt Disney World plant nursery and saw how they create all the topiary sculptures that can be seen in the parks! A topiary is a plant that has been grown and pruned to fit a wire frame. Some topiary’s take 20 years to fully fill their frames and some can be created very quickly using moss and fast growing plants. Miss Hannaford saw the actual Miss Piggy Topiary in the greenhouse as it is no longer on display at Epcot but you can see the sculpture in this video!

The next stop on the tour was behind the scenes at Disney Hollywood Studios in their costume workshop. All the costumes for every Disney character you meet in Walt Disney World as well as every Disney park around the world are created at the costume workshop. Miss Hannaford wished she could have taken home the special fabric cutting machine for her Puppet making! We were allowed to ask lots of questions and we saw how a costume for Minnie Mouse was designed, printed out on special pattern pieces and sewn together!

The next stop was behind the scenes at Disney Animal Kingdom where we saw where the animals sleep at night. We didn’t spend very long at this stop because everyone was very hungry so we got back on the bus and travelled over to Wilderness Lodge to the Whispering Canyon Cafe. Miss Hannaford tried American ribs for the first time as well as corn bread- both were very unusal tastes. Wilderness Lodge was the only place where Miss Hannaford was allowed to take a photo and she really liked the Native American totem pole in the huge atrium of the building! 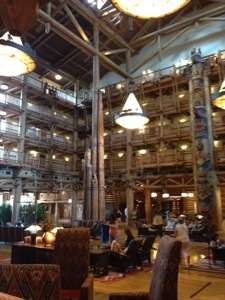 After lunch we headed over to a space called Central Shops and saw how they built everything for the parks all over the world from rides through to props carried by the Disney characters. Objects enter as raw materials or attractions that need maintenance or repair at one end of the building and come out the other end fully finished from construction, painting and final assembly. The building is 9 football fields long and the height of a 10 storey building! We saw animatronic hippos and elephants from the Jungle ride being repaired. A ride called the Astro Orbiter laid out on the floor in hundreds of pieces being repaired and maintained so the the ride remains safe. Miss Hannaford really liked the room where they use moulds to create new parts for the animatronic puppets around the parks. I really liked seeing the printing room were all the signage in the park is created from menus in the restaurants to huge street signs!

This was then followed by a visit to the Magic Kingdom and we went into the Utilidors that run under the whole park. The Ultilidors are corridors/ tunnels so the people who work at the Magic Kingdom can quickly get to where they need to be without disturbing the visitors to the park. It is where dancers in the parade get changed into different costumes and where food supplies for the different restaurants and refreshment carts are kept. We went back upstairs to the outside and saw the new parade called Festival of Fantasy. Miss Hannaford really liked the Dragon from Sleeping Beauty! This was the only other time we were allowed to take pictures so Miss Hannaford recorded this video!

After the parade we finished our 7 hour tour back at Epcot! Miss Hannaford decided to stay at Epcot and see the fireworks show called Illuminations! But that was not for a few more hours so Miss Hannaford took me on the ride that goes around the big ball called Spaceship Earth right at the entrance to Epcot! 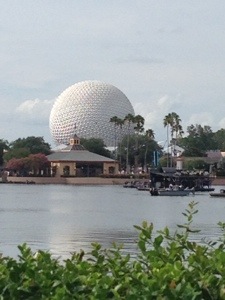 Epcot is designed in 2 halves. The main entrance where Spaceship Earth is is called Future World. The other half of the park is called World Showcase. There are 11 different countries represented in spaces called pavillions. Each pavillion looks like the architecture of that country so in one day you can walk around the world!
Japanese Pavilion 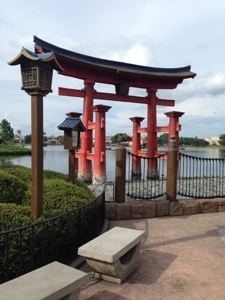 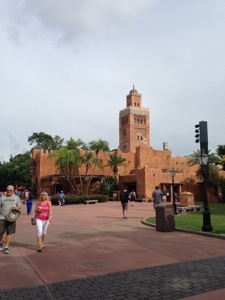 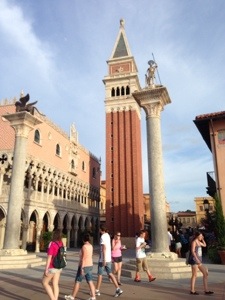 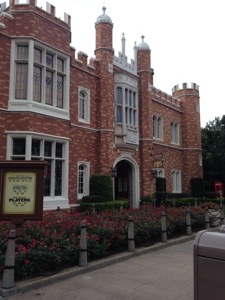 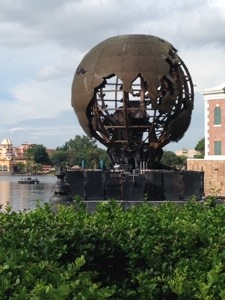 Miss Hannaford found a really good spot to see the fireworks display and filmed it for you to see!