Monday, 29th June 2017
What an amazing day! Miss Hannaford and I went on the tour of NBC Studios at 30 Rockefeller Center, also known as 30 Rock. 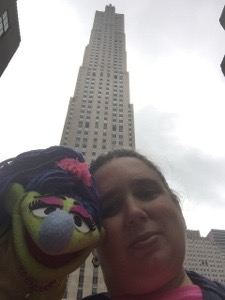 While we were waiting for the tour, both of us got to sit at the Today Show desk. The Today Show is similar to Sunrise on Channel 7 in Australia. 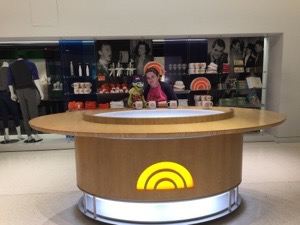 We got to visit the studios of NBC Nightly News, Saturday Night Live, The Tonight Show with Jimmy Fallon, but while we were on the same floor of the building as the Tonight Show, Miss Hannaford achieved a major life goal in puppetry- to see the Muppet Pipes in person!

The Muppet Pipes are a very creative piece of Muppet History. They were originally steam pipes that helped to keep the building warm during winter, but in December, 1964 while waiting hours to go on television, Jim Henson, Don Sahlin, Jerry Juhl and Frank Oz were bored, so they used paint and fur to turn boring pipes into Muppet characters.
The whole story can be read on the Muppet Wiki

Until 2010, the pipes were inside a dressing room, so no one could see them. When the area of the dressing room was renovated, it was decided to turn the Muppet Pipes into an exhibit that people participating in the backstage tour could see the pipes.


I also got to see the new Muppet Pipe Wrench on display adjacent to the Muppet Pipes, which was presented to the host of The Tonight Show, Jimmy Fallon by Kermit the Frog!

At the end of the tour, the tour group got to film their own tonight show video and both Miss Hannaford and I were the guest star in the video!!
You can watch our video here! 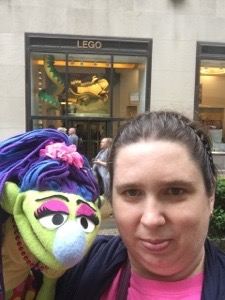