Today was the first day of the Beyond the Sock course. The day started with a briefing and a tour of the University of North Texas Radio, TV, Film and Performing Arts Building. We got to see the set in the TV studio, and it 2 years ago, the set told me instantly what the puppet was, but the strange purple and blue tones did not help with the guessing game of what is the puppet we are making?

After the tour, we went to lunch at our favourite BTS lunch spot- Crooked Crust. 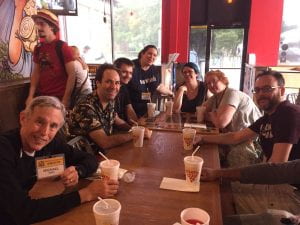 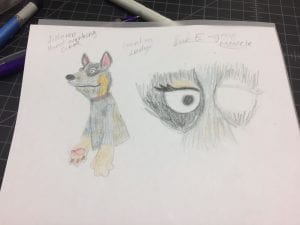 Next came the exciting part, designing my character. Each attendee had the opportunity to take a lucky dip and select a card with a letter on it. That was our main fur colour. After some trading with other attendees, I managed to get a fur that inspired my character design- an Australian Cattle Dog. The rest of the afternoon was dedicated to cutting out the cardstock puppet pattern, and refining our designs. 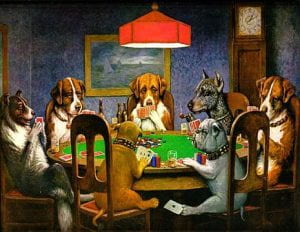 While we were working, the mystery of the set design was explained. It was a representation of the famous painting “A Friend in Need” 1903 by American artist C.M. Collidge. Over the next few days, set dressing will be added to complete the picture.

The attendee group was divided in two first thing in the morning. For the first time, the groups were divided by experience- a group of first time attendees, and I was placed in the multiple time attendee group. The first time attendees went across to the student union for their first performance lesson, and the experienced group went to puppet building first. The first step was to cut out the fur for the paws so that they could be sewn together by the sewing assistants. Once the paws were taken away, the next step was to cut the foam of the head. In building the foam head, there was a unusual twisting motion that had to happen to allow the muzzle to sit correctly to the head.

After lunch, the two groups swapped locations. The advanced group went up to the student union for the first performance workshop. It was a wonderful experience for me, because after 3 previous attempts at Beyond the Sock, many of the elementary puppetry moves came back to me naturally! I was given the feedback that my skills were solid, especially walking onto camera, talking and walking off. I am still finding here/ there exercise tricky, but we were also given new exercises to start extending our skillset.

As soon as we arrived at the university, the advanced group went straight to the building room to start work on cutting out all the separate sections of fur. The head of my puppet was made up of 16 separate pieces. I spent most of the morning session sewing the pieces together. During the session, a reporter from the local paper came through the room with the director of the program. The reporter asked me questions about my experience over my four years at Beyond the Sock and how I have used the experience in my puppetry and teaching practice. The interview did slow my work down, and I had a particularly challenging build with the sheer number of fur pieces I had to put together, but I enjoyed talking about my work with the reporter.

In the afternoon performing session, the advanced group had the opportunity to learn how to puppeteer live hand puppets, and the concept of performing a right hand for a main puppeteer. I had the good fortune to right hand for my teacher. The exercise involved passing a roll of tape between each of the three characters. It was very challenging because I could not see a monitor, and my teacher is significantly taller than me. Many of the people in the advanced group, including myself all pulled up sore in the upper arm after the right handing exercise.

We had a casual get together in the hotel that night after dinner. I spent the evening sewing more of the pieces of the head fur together so that I could catch up to the rest of the group with my work.