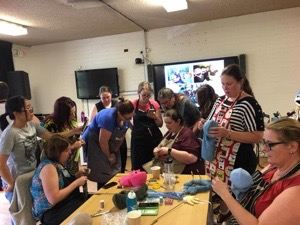 Over 2 days, I had the opportunity to co-lead a Puppetry workshop for Drama Teachers at the Arts Unit NSW. The aim of the workshop was to give Drama Teachers from Primary, Seconday and Special Education settings the opportunity to make a mouth puppet (aka “Muppet” Style) and experience different strategies of teaching puppet performance in the classroom. The Arts Unit is part of the New South Wales Department of Education, and they promote and support all of the Creative and Performing Arts in NSW Public Schools. For me, this was an opportunity to show leadership skills, share how I use Puppetry daily in my school library, as well as showcase my school’s Puppetry class.

There were 15 participants in the workshop from a wide range of primary schools, high schools and special education settings. My role in the workshop was to teach the puppet building part of the workshop, and share the learning I have been doing in monitor puppetry over the last 3 years at Beyond the Sock. One really interesting thing I noticed about how 21st Century Teachers take notes. I cannpot recall any of the teachers taking written notes. Most of the teachers wanted to film my explanations on their phone or tablet. I had to remember to allow a few moments for the teachers to get into a good position to film the explanation.

What could be improved next time:

I asked my Professional Learning Network about how to write blog posts on the go using an iPhone. This post is the test

I have spent all day talking to my Personal Learning Network about a vision for the future of Libraries.

I am concerned with making the Library I manage a relevant place for my students by engaging them in the planning or as Winzenried (2010) describes it- clearly responsive to client needs (pg. 9).

I found this concept on youtube while I was looking up information to help me with Citations (see my posting on the useful ideas for later page). I like the concept of Mindspot in that the stakeholders have a say in the vision of the library and planning is directly aimed at their needs and wants.

I have just finished reading the introduction to Arthur Winzenried’s book Visionary Leaders for Information. What struck me most was his discussion on the five keys to surviving and thriving into the future as a school library.  The five keys suggested by Winzenried (2010) are:

1. What is the moral purpose of the Library?

2. Do I have a clear plan for the Library?

3. Am I being responsive to the needs of my users?

4. Am I developing a working relationship with my users?

5. Have I developed a stronger product focus? Is there a reason for the user to come and use the Library again? (Pages 8-10)

Having been very unwell this past week and needing to ‘rest’ I decided to watch some Star Trek episodes. It has been years since I watched Star Trek Voyager- so I pulled season1 DVD off the shelf. Lo and behold- the episode titled “Prime Factors” the crew wanted to exchange the entire Federation Library of stories for technology to get them home. The some total of thousands of  alien races’ stories were stored on a few sticks of plastic that were downloaded from a database! No libraries here! This got me thinking- does the future envisioned by Star Trek have a place for a physical Library- how does this affect the planning I am doing now for the next three years of the library I manage?

I know that Libraries have featured in some Star Trek Episodes. I decided to ask my Professional Learning Network to see if they could list them- and this is what happened

Star Trek: Original Series “All Our Yesterdays” and the Librarian was called Mr Atoz (A to Z)

Star Trek: Original Series “The Lights of Zetar” the sum total of the Federation’s Knowledge stored in a facility called Memory Alpha

Star Trek: Innsurrection: Riker and Troi in the Ship’s Library (In the outtakes on the DVD- a female matronly Librarian is Shushhing them when they start to flirt)

There were also discussions about all the books that have appeared in Star Trek Episodes, the role of Shakespeare in the stories of Star Trek. The discussion then moved into how Libraries are represented in Science Fiction and then we were off again! People mentioned a Librarian in Star Wars: Attack of the Clones, the very scary Library in Dr Who season 4 episode 8 “Silence in the Library” and its conclusion in episode 9 “Forest of the Dead”

Another of my colleages gave me this link to an article on Libraries in Science Fiction: http://www2.ku.edu/~sfcenter/library.htm

To top it all off- check out this video (and my first attempt at embedding things)!