Over the last few weeks, I have been involved in many video conferencing calls for both my teaching world and my puppetry world. When I have used Zoom, I have used their virtual background feature, and it works really well to a point. The tricky part is if I want to show the other people in the call an object, or even play with a puppet, the virtual background without the green screen option cannot include the object beside me such as a puppet on my arm.

My first thought was, can I use a substitute fabric as a green screen/ chroma key background? I wanted to focus on using the materials I had at home that are a solid colour. I started out exploring bed sheets since they are light to hang up. I had one that is a blue grey colour, and the other was a pale green. While setting up for filming, my new woven polyproplene green screen that I had purchased on Amazon arrived, so now I could compare the effects.

Here are the additional items

Results from the experiment

In Zoom, I got best results from using the green bed sheet and the commercial green screen without any additional lighting apart from the ceiling downlights.

In editing using Adobe Premiere Pro- I got the cleanest background removal results from the professional green screen.

If I was to do the experiment again, I want to see what would happen if I added lights to the sheet/ screen only to even out the colour difference across the surface. I would also iron or smooth out the surface to see if the background removal was more successful.

A frog once said in a TEDx Talk, “If necessity is mother of invention, then creativity is the father”. Given the whole world has been isolated by the COVID 19 pandemic, puppeteers are trying to find ways to reach their audiences remotely. There is a lot of discussion in the puppetry community about how to adapt video conferencing and streaming technology to puppetry.

Over the last 5 years, I have been learning the art of television and film puppetry from 2 amazing gentlemen who I am honoured to call my mentors- Noel MacNeal and Peter Linz. One of the challenges I have faced practising my puppetry skills at home, is recording video of my puppets being puppets. I started out using my webcamera, but it could not record what the puppet was doing. If I use my phone or iPad as the camera, either the image on the screen looks like a mirror, or I can’t see the image on screen. In both of those situations,  I don’t know if the puppet looks right for the audience.

I have assembled my own monitor puppetry kit over the last 5 years with a Sony Handycam, a small flat screen tv which has evolved into a professional 7 inch field monitor as my puppetry monitor, tripod and cables. Even though this setup is in an old suitcase with wheels. it’s very difficult to move around, and I have to download and edit the footage afterwards. This means that the puppet cannot interact live with an audience, or another puppet that is not in the same room. I haven’t been able to acquire the equipment required to live stream from the Handycam to any of the streaming platforms like Facebook live or Zoom yet.

However, on April 14, 2020, my puppetry mentor Peter Linz, shared this photo and a New York Times article on how Elmo’s Playdate was filmed on his Instagram account. I looked at the equipment he was using. It was his mobile phone, linked to his field monitor. The phone was recording the performance, yet he could see what his character Ernie was doing on the monitor. By looking at the cables coming out of the phone in the photo, I immediately worked out I could adapt the equipment I have at home! It was such a creative, innovative solution to the problem!

So this is how I have been able to reverse engineer the setup. Please note that this setup is for iPhone (I have a standard iPhone 11).

Here is a video demonstration of the setup

Over the last ten weeks, I have been teaching green screen filming to a wide range of faculties at my school. We have had multiple classes in English, Sport, Commerce, and Geography come through and use the green screen. Originally, this started when faculties kept borrowing my green fleece fabric for puppet making to use as a green screen with limited success. Fortunately, I found in a resource catalogue a proper green screen kit with 4 soft box lights which I purchased for my school.

Given the number of students who wanted to film using wide shots, it became necessary to purchase a matching additional green screen from Fotogenic to use as a green floor mat.

I was very surprised that the green screen kit bags did not have built in storage space for the actual screen. I feel that it is very important to keep both of the green screens clean and store it tidly with its frame. I ended up purchasing a Gurli cushion cover from Ikea. It is a perfect size for storing both of the screens folded neatly. It’s also bright green, making it very easy to spot in the storeroom. 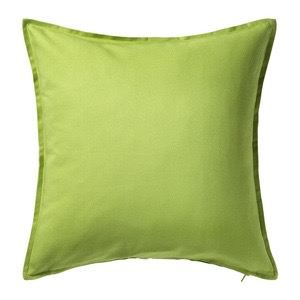 The scariest thing about the green screen setup is how easily the lights can fall over and the globes inside smash. When the globe smashed, I was worried that the large 125W globe would be very expensive to replace. I was pleasantly surprised when the replacement globes from Fotogenic were less than $40. To prevent the light stands falling over in the future, I will be purchasing the appropriate sandbags for the lights so they are less likely to tip over when knocked.

The next amazing thing I learnt while creating the green screen filming kit was how using a teleprompter really helped improve student focus and performance while on camera. The idea for adding a teleprompter came from observing the performance of a year 8 student who is a public speaker and debater. His group was creating a mock- news report, and this student was the news anchor. He delivered all of his lines off the cuff, with enormous confidence, almost directly into the camera. If we had a teleprompter, his performance would have shifted his eye focus directly into the camera, making it professional.

Given in this day and age of ask google and learn from YouTube, I found a number of tutorials online that allowed us to use a school iPad as the prompter display, an old picture frame, 2 science retort stands, a paper box with lids and some black fabric. 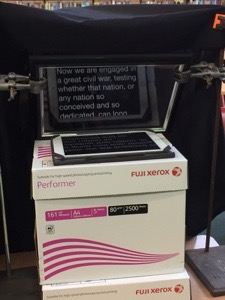 The teleprompter apps we have been using is called Teleprompt+3 which is a paid app that works with Apple Watch. This app is great because it links directly to Dropbox and Google Drive, so students could share their script with me and I could bring it up on the iPad with very little delay. The other app we have been using is Parrot Teleprompter which is a free app. Parrot works very well, and I copy the scripts using email or the google drive app and paste the contents into the app. Both apps are easy to use, the speed of the prompter can be changed for the student, as well as the colour and size of the text. In class, we used both an iPad Air2 and a IPad Pro. The most challenging part of the teleprompter setup we were using, was that we could not change the height of the prompter easily. The deputy principal was really excited at how I had created my own prompter, that he wants me to purchase a professional prompter for the school filming kit on an adjustable stand!