Making the facial features of Totoro.

To make Totoro’s ears/ horns, I modeled the ears using 3 modelling and printing. Due to the scale of the piece, I had to try to cut the horn into 3 pieces. I had a great deal of difficulty in splitting the shape in that I am still not familiar with breaking a model up in Creo Parametric 3.0. I was able to make the bottom two pieces quite easily, but making the top pointed part fit proved to be very difficult to make the right size. I ended up achieving a satisfactory result after lots of failed attempts. I definitely need to learn an alternative approach to making a 3D model that breaks up into interlocking pieces.

To cover the ear with fur, I put the ear into a freezer bag, and covered the bag with small pieces of tape. I then used a small pair of embroidery scissors to cut the tape and plastic off and cut lots of small darts to create a flat shape. The flat shape then became the pattern for cutting the fur. I did add a 3mm seam allowance while cutting the fur so I could hand sew the fur together and turn it over the 3D printed form. The ears/ horns were then sewn around the base onto the fur.

I used more butcher’s paper to create the shapes of the eyes, nose and mouth so that I could experiment with sizes and placement.

To make the nose, I used the butcher’s paper template as a guide to the overall size of the nose and built plasticine up on it. I then used four layers of my own hand made paper to cover the nose form.

I created the eye forms by modeling them on the computer and printing them out using the 3D printer. I then used black acrylic paint to create the pupils.

The mouth of Totoro is how I see out of the puppet. I originally used three layers of curtain netting, but it was too hard to see out of, so I removed one layer.

Totoro’s teeth were drawn onto the mesh using a black Sharpie.

To make Totoro’s whiskers, I used long, black zip ties. To attach them to the face, I cut a small slit into the fur using embroidery scissors. Then, I inserted the square end of the zip tie and glued it in place using hot glue.

The next phase of the construction was to make the concentric rings that are the skeleton of Totoro. Using the calculations I made with the full size plan, all 16 rings were created by measuring the length of the circumference, adding a palm width of cane for overlap and using masking tape to hold the ring closed.

I did run into several issues with the cane. When it arrived, the cane was very tightly coiled. When creating the largest rings, the rings would distort and not lie flat. We tried putting the rings under weights overnight, which did help some of the rings to lie flat-ish. Some rings also responded to hand manipulation of forcing the cane to bend in the opposite direction, but we always risked snapping the cane.

The other challenge I had to address was how to suspend the cane rings from the backpack frame. Adam Savage used a wooden ring bolted to his backpack frame. I don’t have access or expertise in using wood to make a ring, but I do have access to 3D design software and a 3D printer. I designed a circular disc with a section that inserts into the pvc mast. By using gaffer tape, the rings are suspended from the main disc.

All I can say is wow! It works- it’s alive!!!!! I have 16 vertebrae and 8 are moving precisely like they are supposed to! Stage 1 of the tentacle- from the tip to vertebrae 9 is moving and curling. However, for some reason, stage 2 is barely moving. Current working theory is that the brake cable housing I am using is too stiff to allow the stage 2 mechanism to move at all. I may have to make another base plate that has no large passage holes and screw all the brake cable housings into that so that the bare cable is running through the passage holes of the actual tentacle.

I am still waiting for more set screws to arrive so I can finish attaching all the vertebrae and the tail tip. While I am waiting, I have started designing the next mechanism!!!

I have started assembling the tentacle! After printing one of the vertebrae, I held it up to a puppet that it could be used for, and I found that the diameter of the vertebrae was too wide. So I reduced the diameter on the original model to 1.5 inches, reconverted it to metric and printed 12 vertebrae. For the tip, base and vertebrae 8 & 9, where the cable housing had to be inserted or the cables terminated, I had to adjust the design so that the holes were 4mm in diameter.

I consulted with a more experienced colleague of mine and together, we discovered the problem. UP Studio software cannot distinguish between imperial and metric measurements. It can only read in metric, so when I imported my design in imperial measurement of 1.75 inches, it read it as 1.75mm. I had to convert the design parameters to millimetres in the software I use to design 3D objects and then re-import the file into UP Studio. Finally the design could be printed!

I had a much more successful day today, finding the brake cable I need. I ended up going to Clarence Street Cyclery in Sydney where they had both the brake cable and the cable housing! I was really impressed with their service and amused at when they asked me what kind of bike I needed the cable for, and when I said it’s not for a bike, they were very confused.

Now that I have all the cables, I am almost ready to start construction. All that I need to do now is order the set screws for each of the vertebrae and 3D print the first test vertebrae so I can test my concepts.

I have had mixed success finding the necessary hardware for the tentacle mechanism. I was able to get the speedometer cable for the tentacle core at a car parts and accessories store in my area, but finding the bicycle break cable has proven to be impossible as there are no bike repair shops in my neighbourhood. I have one break cable in my collection of puppet parts that I can use, but to make the whole tentacle I need seven more. I have found a bicycle repair shop in Sydney CBD that I will try, otherwise I might have to look online. 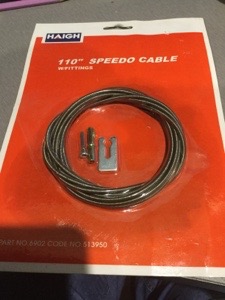 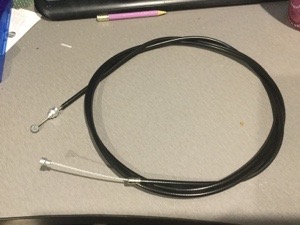 Now that I have the speedometer cable and one of the bicycle break cables, I have started 3D designing the vertebrae. I started by designing a disc that had the holes for the cables marked. Next, I designed the oval passage holes to pull the first stage of cables through the second stage. At the moment, I have two concerns. Firstly, the vertebrae feels too thick dimensionally. The pieces need to be 1/4 inch thick maximum. My second concern is making the passage hole for the set screw that will hold the vertebrae on the core cable. At the moment, the hole is not passing through the stem properly. It could be because the size of the hole is wrong, or the stem is the wrong size. 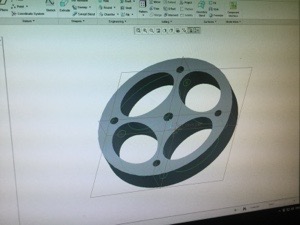 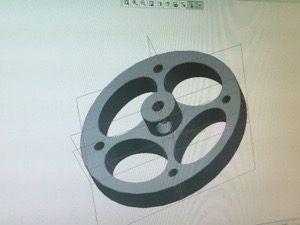 I won’t know how to solve these issues until I 3D print at least 2 of the vertebrae and test fit them into a tentacle.

While I was watching the full tutorial on designing and making tentacles from Stan Winston School of Character Arts, I took some notes on how I might proceed to make my cat’s tail tentacle mechanism. 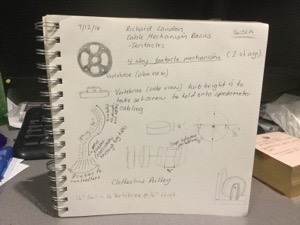 So now I begin the process of sourcing all the hardware required to make the tentacle mechanism. I have to get the hardware first, before I can start modelling and 3D printing the vertebrae. Fortunately, a colleague of mine, made a fantastic suggestion about using bicycle brake cables for the main cables as the cables come with their own housings.

So it is off to Autobarn tomorrow to get the speedometer cable I need for the central shaft of the tail, then I need to find a bike repair shop to get the brake cables I need. I still have to source a few parts like the 16 set screws online but if I can find all the cables on the weekend, I can start 3D designing the vertebrae!

I am about to start my summer school vacation. It has been a challenging year for me teaching and puppetry wise, but now that the year is almost over, I have some time to persue a few of my goals in learning more about mechanical design in puppets.

Here are the videos that have inspired me


But, this book has been my chief inspiration- 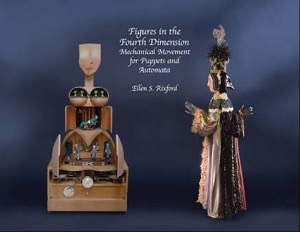 Figures in the Fourth dimension- Mechanical Movement for Puppets and Automata by Ellen S. Rixford

Here is a preview link of this incredible book

This is going to be an interesting summer!

I am now much more comfortable using 123D Design and I have finished designing the remaining components. I also learned another important word in animatronics, E-Bar. In animatronics, the E-bar holds all the main servos that control the puppet’s eyes and the actual eyes are suspended from the bars of the E using screws. This mechanism actually has a second platform directly above the E-Bar for additional servos. The servos on the E-bar control the eyeblink part of the mechanism while the servos on the upper platform control the up/down and side to side movement of the actual eyeball.

A really helpful part of the forum for this particular project over at Stan Winston School of Character Arts, is that the teacher, David Covarrubuas, uploaded a 3D model of the recommended servo for students of the class to use for free! Since I was able to buy that particular servo, it has made designing the E-bar and the upper platform so much easier!

Time to fire up the 3D printer! Can’t wait!