Today is Celebration Day! All the work over the last 2 months on Totoro came together today!

The day started by putting on the legs of Totoro. I then had an hour to wait until the opening ceremony of Celebration Day so I read my favourite book- Jim Henson The Works. My colleagues took a photo of me reading because they know that one of my favourite Muppet pictures is of Richard Hunt reading the newspaper while wearing the legs of Sweetums. 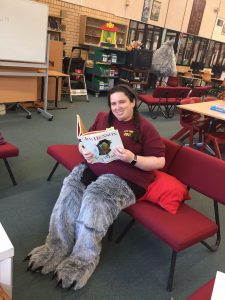 Getting ready to be Totoro- reading my favourite book.

I had entered my Totoro puppet in the Costume Parade. We had to wait 30 minutes in the school hall for the parade to start. While waiting, and shortly before the parade was to start, I was showing the students how the whole costume comes together. As soon as the backpack took the full weight of the puppet- a section in the middle broke- one of the struts had come out of the t-joint, and the puppet fell onto me. I could not fix the backpack in the hall, so I had to leave it behind and hold up the whole costume with my left arm during the costume parade.

Walking out of the hall during the costume parade was an amazing experience. As soon as Totoro appeared, the whole school roared and cheered for him! Because the hall door and back part of the stage was in shadow, it was quite easy to see where I was going. As soon as the sunlight hit the mouth, I could barely see where I was going. Fortunately, I did not run into any of the obstacles on stage, or run into the students who were at the front of the stage as part of the parade. A colleague of mine, standing next to me, was dressed as an inflatable Jabba the Hutt. We made a very funny pair.

After the costume parade was over- I walked back into the hall and took Totoro’s top half off. I had been holding him up for 15 minutes. After the Opening ceremony was over, I put Totoro back on for 10 minutes so that the students could get selfies and hugs from Totoro, and so I could take him over to the Photo Booth to take a few silly pictures. Afterwards, I completely changed out of Totoro so I could run the puppet table during the day. All up, I was in Totoro for 2 hours. It gave me a new understanding and appreciation for what my puppetry teachers go through when they perform costume characters.

Builiding Totoro has been an amaxing experience. I have learnt a great deal about making big puppets, but I still have a lot to learn about joing PVC conduit. Thanks go to my amazing Library assistants who helped with many sections of the build, and thanks are also due to Adam Savage for sharing his build methodology in the original inspirational video. I could not have done it without that original video.