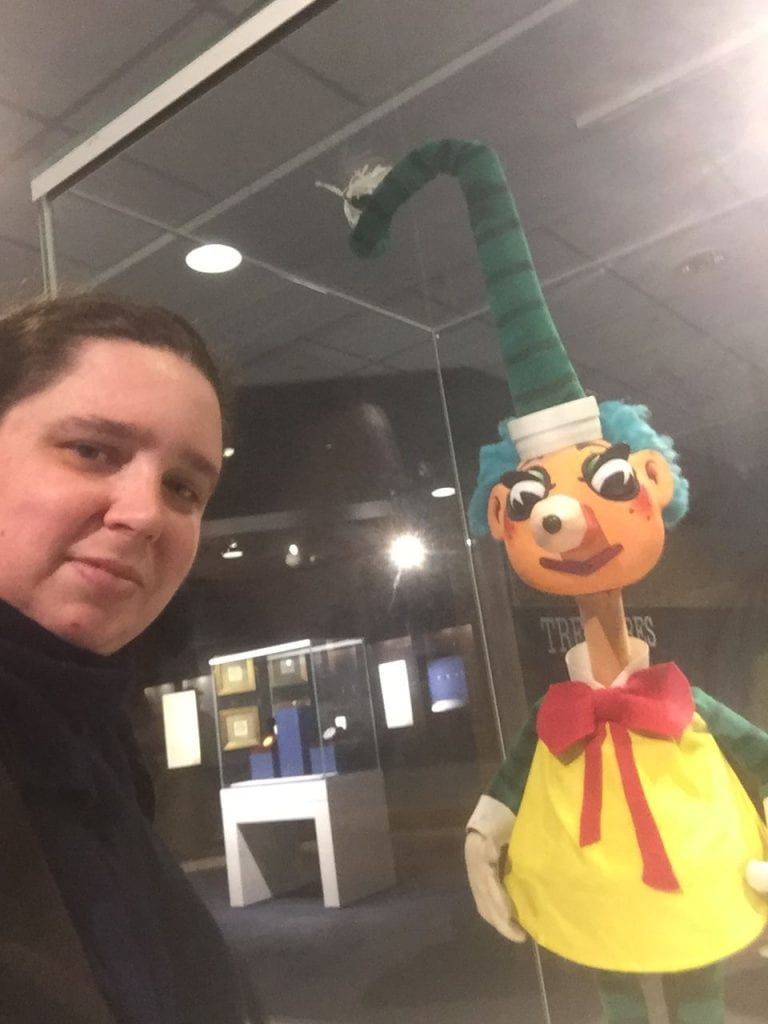 I am often asked, how did I get into the world of puppetry? For me, I am the first in my family to be actively involved in the puppet world, but I did grow up around puppets. I was a child of the 1980’s, and I was taken to lots of live puppet theatre by my mother and grandmother, puppet shows were frequently performed at my school, and the most influential source on me was were puppets on television twice a day. I grew up with Sesame Street, The Muppet Show, The Sooty Show, stop motion presentations of Paddington Bear, and Wind in the Willows, and the most important puppet in Australian television history, Mr Squiggle and Friends. During 2019, Mr Squiggle and Friends because of their significance to Australian culture, have been depicted on actual circulating Australian coins as well as in a collector’s set to celebrate the 60th Anniversary of Mr Squiggle and Friends. To celebrate the anniversary, the puppets from Mr Squiggle and Friends, as well as related materials have gone on display at the Royal Australian Mint in Canberra.

From 1959, only three years after television arrived in Australia, Mr Squiggle, a marionette puppet that could actually draw using a pencil for his nose on camera, would entertain children like me for over 40 years. His friends were Rocket, Blackboard, Bill Steamshovel, Gus the Snail, and a human presenter. Mr Squiggle lived on the moon at 93 Crater Crescent, and used Rocket as his transport to Earth, and he loved to transform squiggles drawn by viewers and sent into the show into illustrations. Mr Squiggle and Friends was created and puppeteered by one man, Norman Hetherington (1921-2010).

I loved the show a great deal, not because the characters were puppets, it was because the storytelling was fun and interesting. Mr Squiggle drew his pictures so that the image was upside down, and as a child, I loved trying to work out what the picture would be before the pink cardboard was turned around so that the image would be right side up. Each image also had a story about it that Mr Squiggle would tell to his human friend. Quite often, once the picture had been finished, Mr Squiggle would add more lines and shapes to it, and ask his human friend to turn the picture around again, a whole new picture would emerge. I also liked how naughty Rocket could be, Rocket never spoke, he used movement and sounds to convey his attitude, and Blackboard could be downright rude with his signature “Hurry Up!”.

Mr Squiggle was a marionette with blinking eyes, and the ability to extend his neck out of his body so that his pencil nose could reach all areas of the drawing board. When I first got to see the Mr Squiggle puppet at the 50 years of Television exhibition in 2009, I finally worked out what the pencil “lead” in his nose was made from- it was a stick of artist charcoal, but Mr Squiggle’s “lead” evolved over the years.

When ever I saw Mr Squiggle draw, his human presenter would hold his hand. Thinking about how the puppet was performed from above, and that his neck extended, I have wondered if the human presenter by holding the puppet’s hand, was actually helping to keep the puppet’s body grounded, allowing the neck to move in and out. 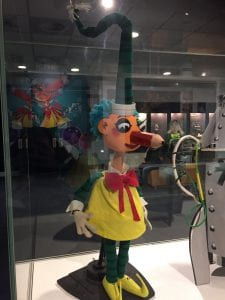 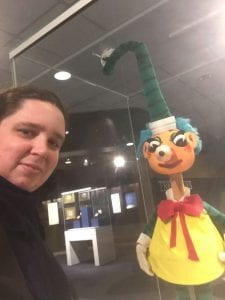 Miss H with Mr Squiggle at the Australian Mint

Bill the Steamshovel was another marionette puppet, who loved to eat concrete crunchies and blow smoke as he talked. The smoke was baby powder blown through tubing that ran from off camera, into the body, and along the puppet’s neck. Most of his construction was from foam, and I loved listening to his riddles!

Sadly, only the head and neck of Bill Steamshovel was on display at the Australian Mint. 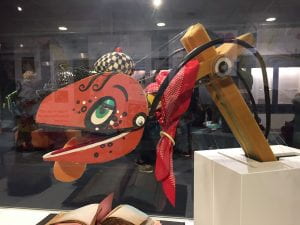 Head and neck of Bill Steamshovel

Rocket was Mr Squiggle’s mode of transport from his home at 93 Crater Crescent the Moon, to visit his friends on Earth. Rocket was a marionette with a hole in the front so that Mr Squiggle’s pencil could stick out. Rocket had no speaking voice, and would quite often use his whistle and/or party blower to communicate impatience akin to a child sticking their tongue out to be rude. The whole front of Rocket would swing down to allow for Mr Squiggle, with assistance from his human companion to get in and out. Once loaded, and with the front door closed over the nose, Mr Squiggle and Rocket would be pulled out of the shot with a blast of powder, then cut to an animated representation of Mr Squiggle returning home through space.

Looking at the Rocket puppet, it was really interesting to see that the puppet was mostly made of wood, and several details on the front, were actually sections of upholstery foam. The rivets were just painted on, yet they looked very real on camera. 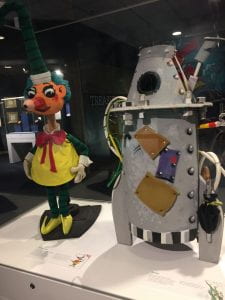 Gus was the only hand puppet on the show. Gus is a very confident, assertive character, to point were for me, I did not like his character because of his bossy, self centred nature. Instead of a shell, Gus had a TV set on his back. I remember how much Gus liked knock knock jokes. 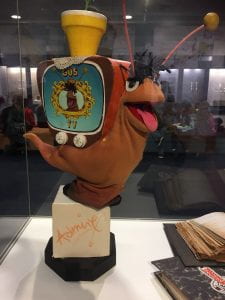 Blackboard was the easel upon which Mr Squiggle drew squiggles for 40 years. Another marionette puppet, made of wood, with rope legs connected to red shoes, Blackboard was a very grumpy character. He only had one eye that could open, and his mouth would open and close when a squiggle was not in the way. Quite often the audience would hear Blackboard’s signature “Hmpf,” or “Hurry up”, but the puppet was not moving because a squiggle was sitting on the two nails.

Blackboard is such an iconic character, that I spotted a sandwich sign outside a coffee shop in Canberra on my way to the Royal Australian Mint, to see the Mr Squiggle exhibition that had been decorated as Blackboard with one eye open. 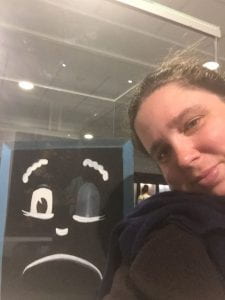 Miss H with the Blackboard puppet 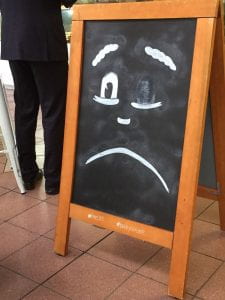 Representation of Blackboard seen outside a coffee shop in Canberra

The exhibition at the Royal Australian Mint

A small display of the Mr Squiggle and Friends puppets, as well as scripts, actual squiggles, and a painting of Mr Squiggle and his human creator, Norman Hetherington was in the central section of the Royal Australian Mint exhibition gallery on the second floor. 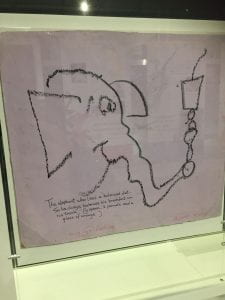 An actual squiggle from the Mr Squiggle TV show.

The exhibition was free to the public, and it was lovely to see the puppets, except I am worried that the puppets don’t look like puppets anymore. So much work has been done to them to make it possible for them to be displayed. All the strings have been removed, and Mr Squiggle’s hat has been changed and twisted so that he looks like the drawings of Mr Squiggle in the picture books, colouring books, and the coin album. The original hat concealed the rod that went from Mr Squiggle’s head all the way up to the controller.

I was disappointed that there were no video monitors in the exhibition space showing episodes or segments of Mr Squiggle and Friends. The show has been off the air since 1999, so the children coming to see Mr Squiggle had no point of reference to understand what their parents or grandparents were explaining of their childhood friend. 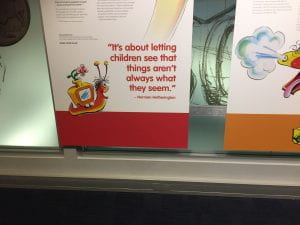