Day 57: Saturday 23rd August
For Miss Hannaford and I, today was our last Harry Potter day. It meant we had to get up really early again to get the 6am train to London and it took 4 hours to get there! The first thing Miss Hannaford wanted to do was to go to a really big park in London called Hampstead Heath which meant we got to catch another red double decker London bus and of course we sat upstairs!

Hampstead Heath is a really big park and it has a really big hill. The heath has lots of park benches you can sit on especially at the top of the hill and many of the benches are dedicated to loved ones who have died but at the very top of the hill facing the skyline of London, is a bench dedicated to the memory of the original Muppet Head Builder Donald Sahlin and the person who invented the Muppets- Jim Henson. This bench is almost a twin of the bench we sat on in Central Park in New York! 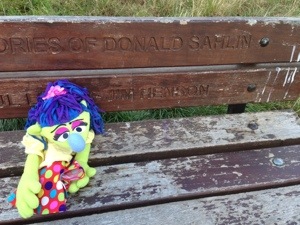 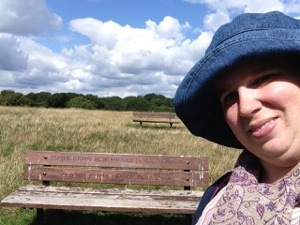 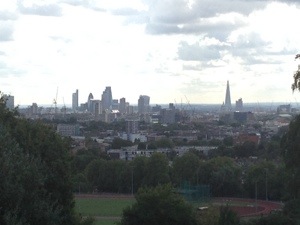 Once we finished on Hampstead Heath, we caught the bus and then the underground train to Temple Station. This was our tour meeting place for the Harry Potter film locations bus tour in the afternoon. Since we got to the meeting point nice and early, we went to sit on a bench next to the Thames river and Miss Hannaford noticed that our bench had a Female Sphinx on the end of the bench! It was such a coincidence since Miss Hannaford is doing research about Egypt and has seen so many drawings of Sphinxes both male and female! 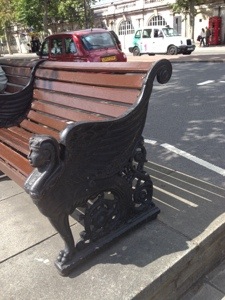 The tour visited many places the walking tour went to but we also visited several new locations including Lambeth Bridge where the Knight bus squeezed between 2 double decker buses in Harry Potter and the Prisoner of Azkaban. 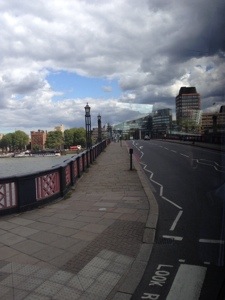 The next new location was Claremont Square that was sort of used for the scene outside Grimmauld Place in Order of the Phoenix. The local council and water authority did not want the filmmakers in Claremont Square so the set design team used a special camera to film a 360 picture of the sqaure and its buildings so they could use a life size picture and a real set to recreate Claremont Square exactly without disrupting the lives of the people who actually live in those houses. 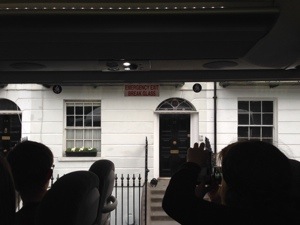 The last new location was Kings Cross Station and Platform 9 3/4. The real platform 9 and 10 does not look like the film because JK Rowling confused the platform at Kings Cross with the platform 9/10 at Euston station which does have arches down the middle to act as a barrier to platform 9 3/4. For filming, the real Hogwarts Express was brought to platform 3/4 at Kings Cross. Since Kings Cross is a real station, tourists are not alowed on platform 9/10 or 3/4 unless they are traveling on a train, so a wall has been built just outside platforms 9/10 and Harry’s trolley with trunk and Hedwig’s cage are embedded into the wall so you can have a picture taken! The queue was very long so Miss Hannaford and I went into the Platform 9 3/4 shop next door to buy some special souvenirs. 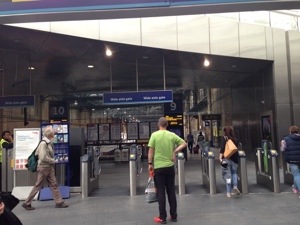 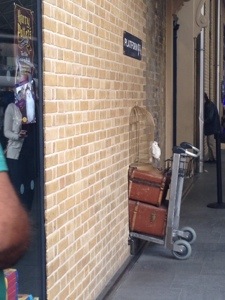 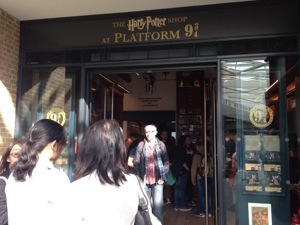 Outside Kings Cross Station is a giant Hedwig Cage with a swing so you can sit on “a perch” and pretend to be Hedwig! 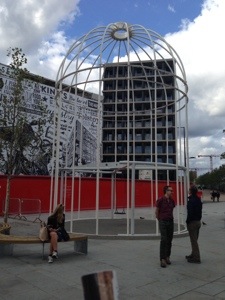 Day 58: Sunday 24th August
Today was another rest day at the hotel. Miss Hannaford kept working on her research- sorting out her notes and I watched a few very interesting TV movies including one called Death comes to Pemberly. It is sort of a sequel to the famous Pride and Prejudice by Jane Austen- with a murder mystery to solve.

The summer here in England is the same as our winter in Australia! Very cold and it rains every day! So it is perfect weather for staying inside!

We only have 1 more week here in England before we travel to Italy but Misd Hannaford has organised some interesting outings and activities for us to go on or do during the week.