The timetable for today’s workshops is the same as the last 2 days which made knowing where to be and what to do much easier! During the morning session puppet making workshop, Miss Hannaford learnt a new way of attaching arm rods to the hands of the puppet. This method involving gluing the metal arm rod onto a piece of plastic called Sintra, then gluing the plastic between the 2 foam pieces of the hand. The rest of the workshop was devoted to sewing all the pieces of fur together to finish the skin of the monkey! There are many pieces of fur so some of the students chose to send the sewing to the other room where there were volunteers with sewing machines but Miss Hannaford chose to bring the pieces back to the hotel and put them together by hand stitching for homework.

After lunch with all the other students, it was time for the performance workshop!

After a few more small group exercises in telling stories and making the puppets look at the puppet who is talking, it was time to start rehearsing the final show! Each student is asked to create their own short performance of less than 3 minutes as well as participate in a group song which has all the workshop attendees plus the instructors in it! The song chosen for 2015 was “We’ve got a dream” from the movie Tangled. 20 puppeteers and puppets had to squish into a very small space to learn to move together. The good part is that no one had to sing! All the puppets were lipsyncing to the song! The homework from the performance class was to learn the puppet choreography and the words of the song! So once Miss Hannaford and the other attendees got back to the hotel, everyone had so much homework that they organised their own dinner and went back to their rooms to finish their homework.

Today was the last day of Beyond the Sock 2015! Miss Hannaford finished all her homework but she was worried that she didn’t quite have the choreography of the song quite right. The timetable was the same as the last few days, so in the morning, Miss Hannaford nearly finished building her Monkey puppet by inserting the foam head into the skin and she nearly finished creating the eyes when she had to stop for lunch. No one was allowed to stay inside the workshop room on their own because of all the dangerous equipment around!

After lunch was the performance workshop where the focus of today’s lesson was learning to read scripts taped beside the monitors but to read the script and perform the puppet as a character. Students were paired together but each pair was given a different script to perform. The goal of the exercise was to be bold in terms of character choices as the script that Miss Hannaford and her pair named Will was given could be interpreted in many different ways! After all the groups performed their scripts, it was time to rehearse the group song a few more times!

The performance workshop ended at 4pm because everyone had to run back to the build workshop to finish their monkey puppets! All Miss Hannaford had to do was attach the nose and eyes to her puppet. What really interested Miss Hannaford was that the nose shape of her puppet was printed using a 3D printer and that while she was at the performance class, the volunteers in the build workshop had glued on a safety stem from a doll joint so she could attach the nose to the puppet and it won’t come off! Once the puppet was finished, Miss Hannaford had to take her puppet to a photo shoot back in the theatre and race back to the performance studio so she could rehearse her performance piece and the group song with her new monkey puppet called Matilda!

At 7pm, the audience for the show started to arrive. The audience was made up of friends and family of the attendees; Professors, Lecturers and students from the University; and people off the street who had heard that there was a free puppet show! Everyone did their little performances that included songs, scenes and jokes. The two performance teachers Noel McNeal and Peter Linz used puppets to act as hosts for the show by introducing each act but they also helped the workshop attendees perform their characters by moving arm rods or bits of scenery! You can see a panorama photo of the TV studio and set we got to perform in at the bottom of all the pictures! You can even see the 2 real tv cameras that recorded the performance!

The show was really funny and the group song was a huge success! At the end of the show, it was time to take the big group photo and for everyone to say goodbye. Miss Hannaford’s highlight was to have a picture taken with the teachers Peter and Noel but she also got a hug from both of them! I was really proud of Miss Hannaford for being brave and performing in front of a TV camera and studio audience!

Tomorrow we fly home to Australia. I can see how tired Miss Hannaford is after such an exciting week so I expect that she will sleep most of the way home. I had a wonderful holiday with Miss Hannaford! 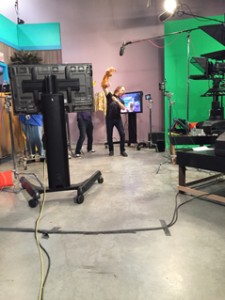 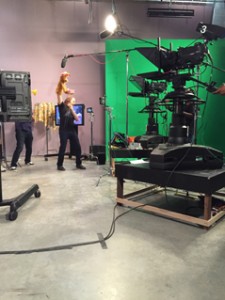 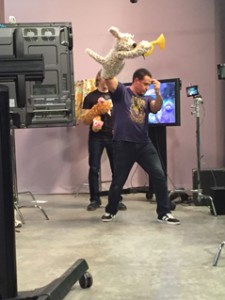 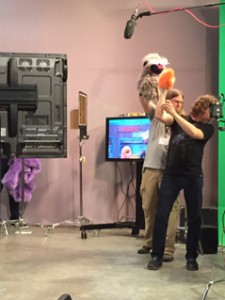 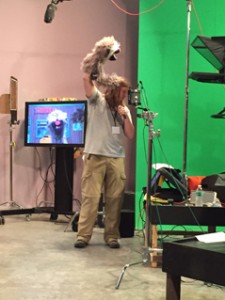 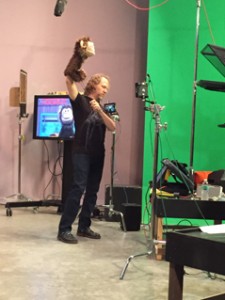 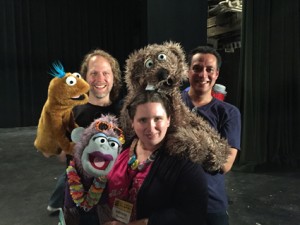