Second day of Beyond the Sock! Many of the workshop students including Miss Hannaford are staying in the same hotel so we ended up having breakfast together which gave us a chance to learn each other’s name and where in the world we came from. Miss Hannaford and I are the only humans and puppets from another country. Everyone else lives in the United States of America. The hotel has it’s own little shuttle bus and everyone going to Beyond the Sock caught the bus over to the University of North Texas.

The University’s theatre building not only has the workshop rooms we are using but also a huge theatre for performances. Everyone met there before we were split into 2 groups. Miss Hannaford was in group A along with 8 other people. Group B had 10 people in it. The reason we were split into small groups was so everyone could get individual attention and help from the teachers but also to be safe inside the two workrooms since there was lots of machinery and cables around us. Miss Hannaford was given a timetable which showed Group A did Puppet Making in the morning and Performing for TV in afternoon after lunch while group B did the opposite.

All the students were given their own special box of supplies based on the fur and fleece they chose the day before. The main task in the puppet making class was to cut out and glue the foam together for the Monkey head as well as trace the hand template onto the fleece fabric so they could be sewn together ready for class the next day. 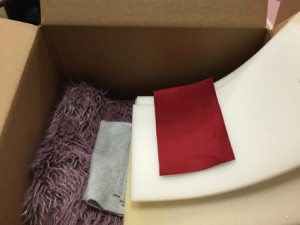 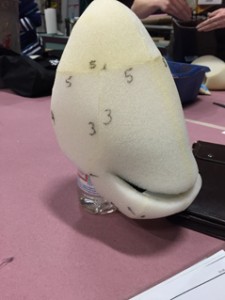 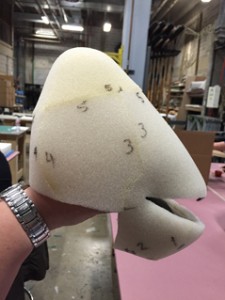 Lunchtime was at 12:45pm so all the students and teachers walked down the short street from the building to a wonderful pizza restaurant called Crooked Crust. This gave Miss Hannaford a chance to talk to students from Group B to find out what they learnt in their morning session.

The afternoon session started at 1:45pm promptly. The first exercise was to hold your hand in the air as if there was a puppet on your arm and learn how to move your hand properly so that the puppet eyes were looking directly at the mirror. One of the teachers is Noel McNeal and he gave us practice puppet eyes made of paper with a pipe cleaner ring. We did the alphabet as well as counting to 20. The big challenge of the afternoon was to use actual practice puppets and stand in front of a TV camera so that the puppet is in the view of the camera not the head of the puppeteer! We learnt to centre the puppet and make it look directly into the camera then make the puppet walk into the ‘shot’ say hi and walk out without moving our feet! The workshop day ended at 6pm with a bus ride back to the University. Miss Hannaford did go with some of the other students to a local craft store to buy some costume elements for her puppet and we all had dinner together at one of the restaurants next door to the hotel!

Here is a video made by the staff at Beyond the Sock made about some of the activities we did during the first 2 days of the workshop!

Today’s timetable was the same as yesterday. Puppet making in the morning, Puppet performance for film and TV in the afternoon. In the making workshop, Miss Hannaford started to cut out the purple fur of her monkey. Very quickly all the worktables, floor and people’s clothes were covered in the different fur we were all using! Everyone had a different colour of fur and when fur is cut, it becomes really messy! Then it was time to start to sew it together. Student’s had the choice of sending the cut out pieces to the expert sewers in another room, but Miss Hannaford wanted to sew the puppet herself so she ended up taking the puppet pieces back to the hotel to sew together for homework.

In the afternoon workshop, Miss Hannaford started working with other students in group performances. The lesson was to get the puppet to look at each other while another character was talking. Another exercise was to get the puppet to use it’s head to describe directions. The puppet had to walk into the shot, look at the camera and say “Hi, I was over there and now I am going over here”. On the word “there” the puppet had to look in that direction, then face the camera again and turn the other direction when saying “here” When performing a character for TV, the puppeteer looks at small tv screens around them to see what the puppet is doing. The challenge is that if the puppet walks right, on screen, the puppet is moving left so it is very tricky to work out which way the puppet is actually going when the puppeteer has to move as well.

In the next picture, Miss Hannaford is performing the pink puppet with 2 other students. The man at the end with the blue puppet is famous puppeteer Noel McNeal! You can see one of the tiny TV screens we used while performing next to his shoulder. 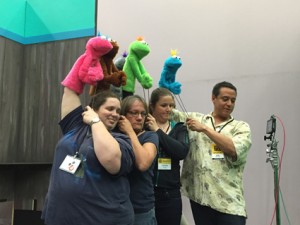 Here is the video of today at the workshop created by the Beyond the Sock Staff!