Today Miss Hannaford continued to work on her puppetry in the TV studio. The first activity of the day was one of Miss Hannaford’s favourite activities from Beyond the Sock 2015- Word Pairs Mahna Mahna. All the students had to take turns in front of the camera to say a word right after the person before them, but the tricky part was to keep the rhythm so as to not break the chain. Some of the word pairs were very funny!

Miss Hannaford was really excited during the class because her teachers Noel and Peter gave her a quick lesson on using a live hand puppet. One of our puppet travelling companions is No Name, the purple live hand monster that Miss Hannaford made in 2011. 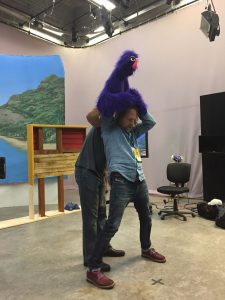 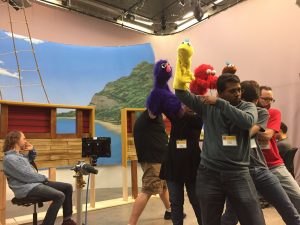 Having No Name in the studio with us, gave other students the opportunity to learn how to perform other kinds of foam puppets . Miss Hannaford also learnt a valuable lesson in why foam puppets like the Muppets, don’t have flat eyes. When the puppet turns sideways to the camera, the audience can’t see both eyes!

After lunch, was the next puppet building class. In this class, Miss Hannaford learnt a new way to make puppet arms. She has never made arms with foam muscles around string before! 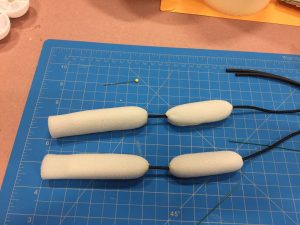 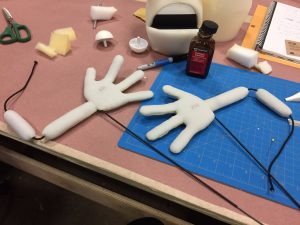 During the lesson, the puppet building teacher Pasha, came around to show Miss Hannaford how to carve down the brow bone and cheek bones on her ghost pirate so that they looked more natural. The first step was to glue the bone pieces onto the skull, including doubling the thickness of the brow bone, then my teacher, Pasha used a blade to carve the bones into smoother shapes. The last step was to use a Dremel tool to smooth out the bone pieces. 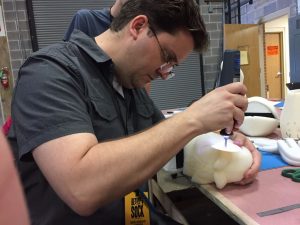 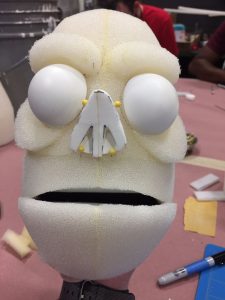 The next step was to start covering the face with the fleece. To make the fleece take the form of the bones, it was important to use small dabs of hot glue inside the nose, under the cheek bones, between the eyebrows and above the eyebrows. The back of the head was then sewn closed using the ladder stitch. 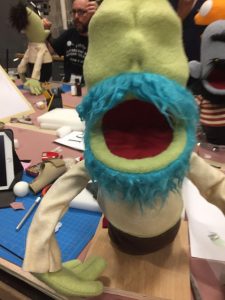 Tomorrow, everything has to be finished including learning the lines of the group song!