Day 11: Tuesday 8th July
After visiting Epcot last night, Miss Hannaford and I wanted to come back and see some of it in the cool of the early morning. Since we were staying at a hotel within the boundary of Walt Disney World, we were allowed to go into Epcot at 8am- a full hour before the rest of the public! 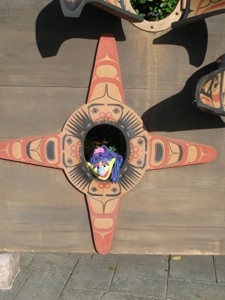 We then walked back towards Spaceship Earth and found a really interesting building that looked similar to a pyramid. The attraction inside was called Journey into Imagination with Figment. Figment is a little puppet character and Miss Hannaford knows who puppeteered and provided the voice of figment so we went on the ride. The ride is really slow and you see little scenes on various sides of the little train but before we got to the halfway point- the train stopped! The people who supervise the ride had to come and guide the passengers back to the start of the ride because the ride was now broken. The good part was that because we waited quietly and patiently, the staff gave us special passes to jump the queue at any attraction in Epcot! 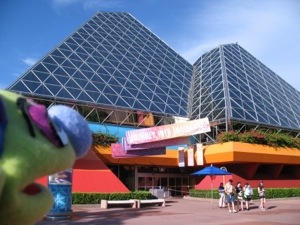 Miss Hannaford and I did get our picture taken in front of Spaceship Earth and we saw the special World Cup Soccer topiary display. 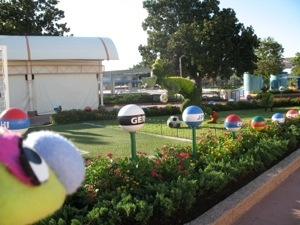 We then caught the monorail from Epcot to the Magic Kingdom! The first thing you see when you arrive at the Magic Kingdom is the steam train station. It is free to go for a ride so Miss Hannaford and I went up to the platform and had a train ride around the whole park. It was also very helpful for working out which part of the park we wanted to visit first! 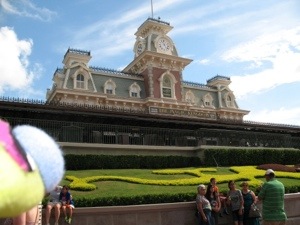 This was our view of Main Street as we got off the train! 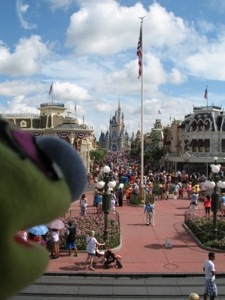 Miss Hannaford booked us in to meet Mickey Mouse at the Town Square Theatre! Mickey told us a story about a ghost who had followed him home one day and he showed us what the ghost was doing when Mickey met him. It looked like the ghost was trying to hitchike! 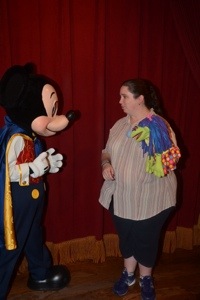 Since I had finally met Mickey Mouse, Miss Hannaford bought me my own set of Mickey Mouse Ears to wear and even had my name stitched on the back! 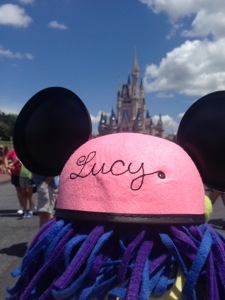 After we met Mickey, the street party parade was going past! http://youtu.be/DhSSW_LUNag
As we walked up Main Street USA towards Cinderella’s Castle, we stopped to have our photo taken in front of the castle and Tinkerbell landed on our hands wishing us a happy ever after! 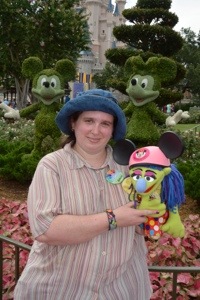 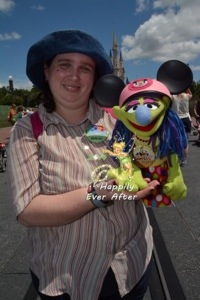 Next, Miss Hannaford wanted to see the famous Hall of Presidents because of the audio animatronics used there to make each of America’s past and current presidents come to life. 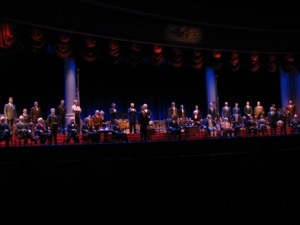 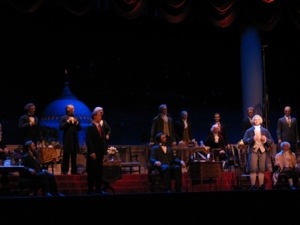 It was then time for Miss Hannaford to go back on a ride she has always loved since she was last in Disney World 20 years ago! It is called the Haunted Mansion and it uses lots of movie making tricks to scare people. Miss Hannaford thinks they have changed the location of the building as she doesn’t recognise it, but they have added lots of fake tombstones some of which have silly names on them. 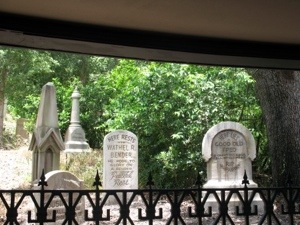 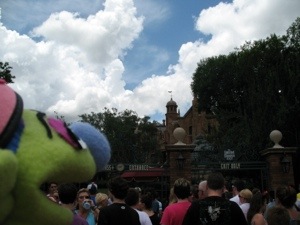 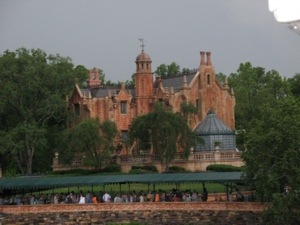 During July in Florida, it is very hot and humid as it is a tropical climate. There is a major electrical storm virtually every afternoon. So during the storm on this day, Miss Hannaford decided to go to Pinnochio Village Haus to eat dinner. Across from Pinochio’s Haus is an attraction called Mickey’s Philharmagic. I really enjoyed the presentation because it was in 4D. You have to wear the special 3D glasses but when Donald Duck gets caught in the wind- the wind blows on the audience too! When Donald can’t control the waves like Mickey, the audience gets splashed with a little bit of water too!

After Mickey’s Philharmagic, it was time for the next parade called Festival of Fantasy! Miss Hannaford really liked it because of the big, mechanical dragon puppet from Sleeping Beauty! http://youtu.be/nzNC_QrzI_U

Now one area of the Magic Kingdom Miss Hannaford never got to 20 years ago was Tomorrowland. So since she had time to spare before the night parade, Miss Hannaford went to Monster’s Inc Laugh Floor where Mike and some of the other monsters were telling jokes to collect everyone’s laughter to power Monstropolis. They even asked the audience to submit jokes or to participate live! Next door to the laugh floor was Walt Disney’s Carrousel of Progress. This was a demonstration of how humans have used progress in technology in the family home starting at the beginning of the 20th Century. On our way to our next activity, Miss Hannaford took me inside Cinderella’s castle so I could see all the amazing pictures on the wall made up of tiny tiles called Mosaics. http://youtu.be/33t5Ok1qSr4

Our next activity was to go on a ride on the Paddlewheel boat called Liberty Bell along the frontierland river. 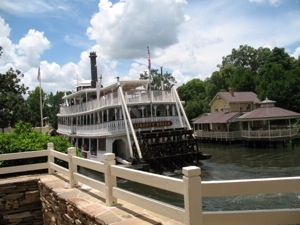 The boat uses steam power to turn the paddle wheel- you can see the arm that turns the wheel in this video.

The last 3 activities of the day was the Main Street Electrical Parade followed by Celebrate the Magic where special projections were put up on Cinderella’s castle, followed by the big fireworks show called Wishes!

It has been a very long day- but boy it has been fun!
– Lucy